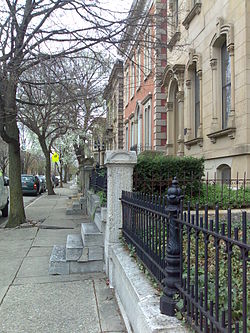 Dayton Street is a historic district in Cincinnati, Ohio, this area was once known as millionaire’s row due to an influx of wealthy business men during the turn of the century. This area has been abandoned for some time which has prompted Zada Development Group to collaborate with the Dayton Street Neighborhood Association in order to revive a Community rich in history and architecture. Due to the Architectural heritage of the buildings the Government is willing to provided Historical Tax credit incentive for real-estate developers, thus providing the necessary incentive to make a full scale revival feasible.

Goals of the Project

The rehabilitation and adaptive reuse of the former Heberle School property into apartments with complimenting commercial space provides a significant opportunity that is consistent with Zada Development’s mission of providing enlivened, enriched and diverse communities.

History of the Project Property

Like many once thriving turn of the century urban neighborhoods the Dayton Street Historic Area has been severely affected by a plethora of factors that have favored industrial development and mobility at the expense of fostering suitable urban living environments for the middle class family. A resultant has been the further concentration of social economic classes, leaving primarily the impoverished and at-risk residents to attend to non-core urban areas.

Unlike many neighborhoods that have fallen into severe physical and social disrepair, Dayton Street possesses the unique asset of an inventory of distinguished, once luxury, townhouses that are of remarkably similar architectural style. Development of the district during the 1850 to early 1900 period is reflective of the wealth spurred by a neighborhood proximate to Cincinnati’s then booming pork and beer brewing industry. Once referred to as Millionaire’s Row, this area began again to receive recognition in the mid 1960’s for its unique and storied contribution to the history of Cincinnati and the region in general. Unfortunately, for the Dayton Street area, which is one sub-neighborhood of many that are part of the greater Cincinnati Neighborhood of West End, it has only been within the last fifteen years that West End has experienced core area renovation of building inventory and a positive shift in direction from the social distress common to severely blighted communities. The Dayton Street Preservation District, its Cincinnati designation, consists of approximately eighteen to twenty blocks of primarily residential structures with mixed commercial and industrial development at its boundaries. It is geographically separated from other communities by an interstate highway to its West and Central Avenue, a major thoroughfare to its East. It is the northern most parcel of West End.

In the over four decades since it was officially acknowledged by Cincinnati Ordinance, proclaiming it a protected historic zone, and again in the mid 1970’s recognized for its national merit and put under the authority of the United States Park Service and Secretary of State as a federal historic district, the area has failed to gain sufficient to energy to recover. Even with its protected status it continues to lose its iconic treasures due to neglect and vandalism. In large part what distinguishes Dayton Street also hinders its recovery. Individually the historic homes are protected from demolition or aggressive redevelopment. Without an all-encompassing plan to restore multiple tracts collectively, sufficient inertia cannot be gained to effect any significant economic or social betterment of the greater neighborhood, leaving potential investment a victim of circumstance.

The re-introduction of the Heberle property as an income-producing asset for the Dayton Street District area is only a part of Zada’s overall re-vitalization strategy for the eighteen to twenty block area neighborhood that defines the northern edge of Cincinnati’s West End community.

Zada Development has recently acquired other properties of various scale within the immediate area and is continuing its evaluations in pursuit of establishing a balance of work, live and play investments to complement its multi-faceted plan.

One such property, now directly owned by Zada Development in addition to Heberle, is the historic former Lafayette Bloom School property. Of similar aspirations but demanding its own unique and complimentary mix of housing that will lean more towards market rate living, Lafayette Bloom will also include additional space for commercial or civic use, as well as open public space. It is anticipated that the approximately 100,000 square foot Lafayette Bloom facility will be put into service as part of the comprehensive re-investment strategy’s immediate second phase. The re-introduction of the Heberle and Lafayette Bloom properties present the unique opportunity of scale in this neighborhood, across two adjacent city blocks that will have significant positive impact on the mentality of other developers and property owners now invested or considering investment in the neighborhood.

An aggressive marketing campaign is planned. In addition to promoting the benefits of living at Heberle as a fresh, new, secured and safe facility that is located in a diverse neighborhood with convenient access to public transportation, immediate interstate access, proximity to downtown and outlaying work centers and convenient access to social services. The campaign will leverage the re-investment success stories of adjacent neighborhoods such as the Over the Rhine and Findley Market. These areas have just within the past few years experienced working and comprehensive re-revitalization strategies and are profoundly influencing investment interest in adjacent areas like the Dayton Street area.

The rehabilitation of Heberle as a four story residential development will allow it qualify under USGBC LEED NC guidelines. Energy Star in addition to Silver Certification under LEED will provide baseline design criteria for Heberle as a sustainable, high performance development.

The Heberle Development will consist of 59 apartment units complimented by 5,000 to 6,000 SF of street level commercial space. The commercial space provided by Heberle will be marketed to a mix of smaller and complimentary social service, senior and special needs support organizations as well as boutique retailers whose target demographic and required critical mass of population are aligned with the needs and scale of the development and the neighborhood in general. The City of Cincinnati, the Port of Greater Cincinnati Development Authority and other enterprise empowerment sources are being pursued in this effort.

Analysis of available public statistical information, market studies provided by Vogt, Santer Insites, Ltd, the consultation of notable local project team members that possess extensive familiarity and verifiable success records with low income property management and its development in addition to the affirmation of local officials and neighborhood stakeholders have aided in the determination that the Heberle Development as proposed will be welcomed and well positioned for success.

Project Financing sources are expected to include 9% LIHTC, City of Cincinnati CRA abatement and permanent debt.

A once abandoned area less than .5 miles from Historical Dayton Street has already proved to be a
successful redevelopment.

The Findlay Market district is a center of economic activity in Over-the-Rhine. Cincinnati City
Council named The Corporation for Findlay Market its Preferred Developer for 39 city-owned
properties near the market in June 2006.[5]

In 2010, the market became 100% occupied and continues to grow. In 2004, the City of Cincinnati
completed a $16 million renovation of the market.

Findlay Market is a gathering place for people from all over the city. It routinely attracts perhaps the
most socially, economically, racially, and ethnically diverse crowds found anywhere in Cincinnati.
They come for the sights and sounds and smells of an old-fashioned public market, for the great
variety of fabulous fresh foods, for bargains, for people watching, and for a quintessentially urban
shopping experience.